Lonely at the top 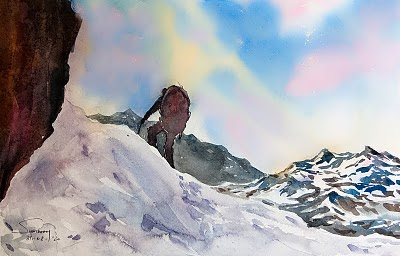 Lonely at the top : Watercolour : 15 X 11 inches
Click on the image for a larger version

Have been toying the idea of doing something of this kind for a while now. This was a joyful experience and provided cartloads of lessons to learn. I guess the guy would've loved it if I had let him be a not so muddy wash. Anyway, the possibility of a mountaineer series is lurking around :)

Before I forget, do you know that not just Mt. Rushmore, but all mountains have faces? Well here's the proof. Look (closely) at the dark piece of rock on the left of this sketch.

I am sure you think I planned it that way. But I swear that it just took that shape and I hadn't noticed it until I had finished the sketch.

Well, isn't art full of glorious surprises ?
fine print :: the distant range of mountains that exist only in the painting is camouflaging a dirty back run beneath it !

On second thoughts, the dark portion to the left seems to be throwing the composition off balance. Here's a cropped version which looks far more pleasing to me. Guess, that rock got too dark. Some flakes of snow on it would've helped, eh ? Does that call for a second attempt ? 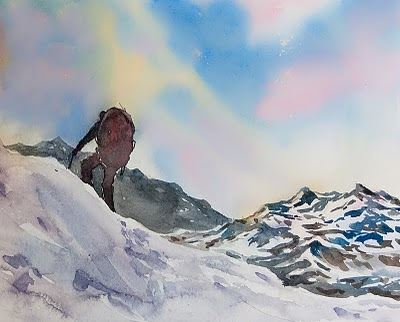 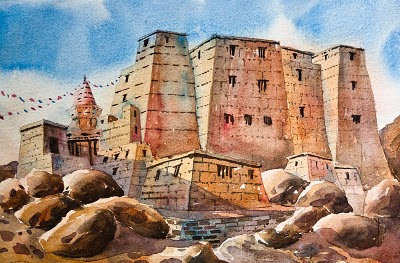 Leh Palace : Watercolour : 15 X 11 inches
Click on the image for a larger view
Just another view of the Leh Palace. The primary reason why I did his was because I wasn't too happy with yesterday's attempt. How do you like this one?

Guess I should move on to other subjects :)

Your comments, critiques and suggestions please. Thanks.
Posted by Sujit Sudhi at 3:53 AM 4 comments: 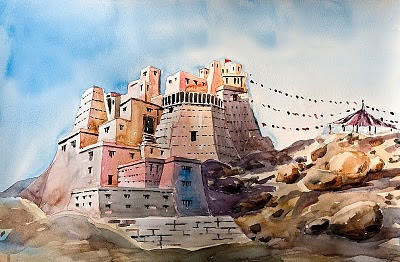 Leh Palace : Watercolour : 22 X 15 inches
Click on the image for a larger version

Here it is. The watercolour avtar of the previous post. Not a disaster, but not something to be very satisfied about. I decided to write it off as a bad patch and move on.

Your comments, critiques and suggestions please. Thanks.
Posted by Sujit Sudhi at 4:36 AM 6 comments: 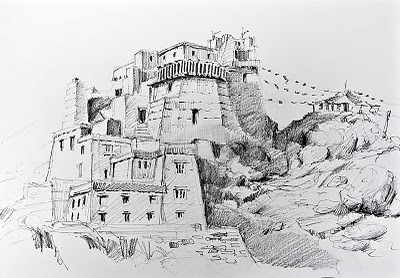 Leh Palace : Pencil : 12 X 10 inches
Click on the image for a larger version

Well, I wanted to do a watercolour today and decided on taking a shot at the Leh Palace, or what's left of it, rather. As always, I started with a sketch and when I finished it I decided that I might as well leave it at that.

What does one look for in art? The finished work or the joy of 'creation' ? I found joy in 'creating' this sketch and I am afraid I might kill it by taking this subject to the next level - a painting that is.

Or am I scared that I might not get good results with the same subject in watercolour. Yes perhaps. Your greatest enemy is yourself, eh ?

I'd call it a day well spent.

I was at a special exhibition of paintings on India by British artists - all of them done between 1790 and 1927. It was an amazing experience and I spent hours gaping at those stunningly beautiful watercolours. The fact that I was the only one at the exhibition made it all the more interesting since I could spent all the time I wanted to, looking at those masterpieces with no one to interrupt me.

Picture this. About a hundred top class paintings to look at. All the time in the world. Absolute silence. Would you call that bliss?

The works on display included those of 18th and 19th artists like Thomas Daniell, William Daniell, George Chinnery, Thomas Longcroft, Charles Harcourt Chambers, Robert Smith, William Carpenter and William Simpson. Honestly, I haven't heard of most of these artists ever and was stunned by the fact that a good number of them were amateur artists. Does that inspire you ?

For those of you who are not within driving distance of the museum here's a sample of what you are missing. 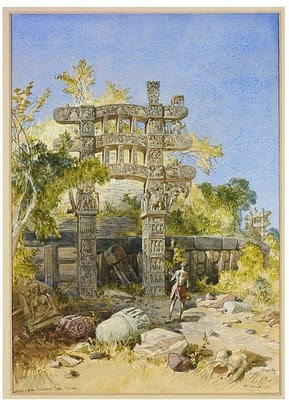 Gateway of the Buddhist Top at Sanchi : William Simpson : 1862 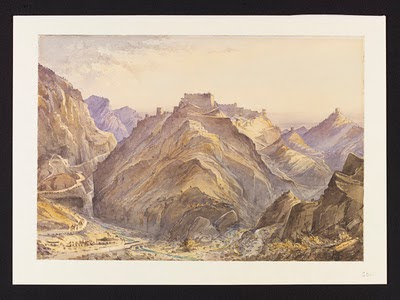 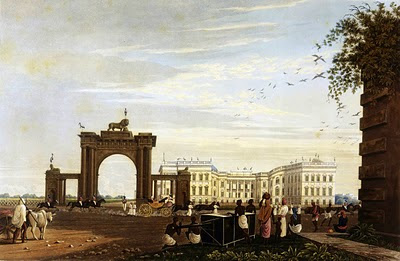 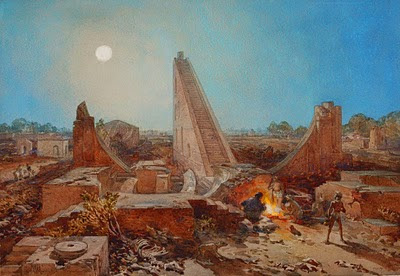 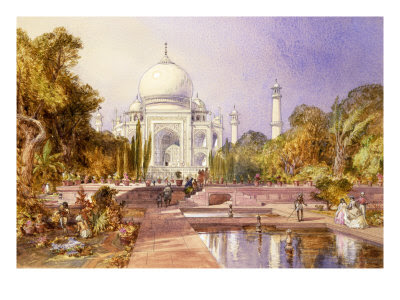 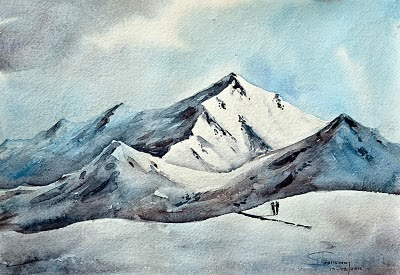 The Summit : Watercolour : 15 X 11 inches
Click on the image for a larger view

Here's what I brought back from a painting trip to the Himalayas. Kidding :)

Jokes apart, This was inspired by accounts of Himalayan expeditions that I have been reading lately. I enjoyed doing this one especially since I only had to reach out for two colours.

Your comments, crtiques and suggestions please. Thanks
Posted by Sujit Sudhi at 1:32 AM 9 comments: 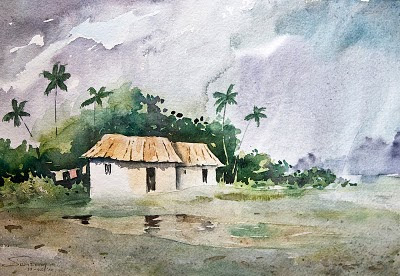 After the rain : Watercolour : 15 X 11 inches
Click on the image for a larger view
This one is an attempt to capture the wet atmosphere after the rain. Guess I failed, more or less. The foreground is a disaster, especially the reflections. Nevertheless here it is for you to see.

Your comments, suggestions and critiques please. Thanks.
Posted by Sujit Sudhi at 2:35 AM 6 comments: 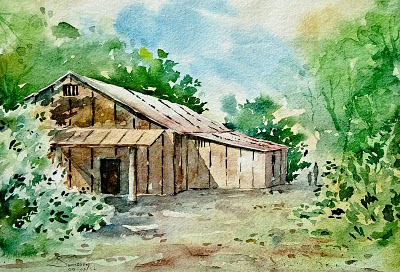 Old Warehouse : Watercolour : 15 X 11 inches
Click on the image for a larger view
I must admit that I am foliage phobic. I tend to shy away from subjects that have too much of them. Lately, I have been telling myself that I need to focus on my weak areas. That was when, Vinayak Deshmukh who's a fellow blogger and a good friend sent me a picture of one of his paintings. I derived inspiration from it and here's my interpretation of the same scene. I made sure there was enough foliage to challenge my brush.
On a lighter note, when I was done with this painting I showed it to my 5 year old. She liked it and wanted to be in the scene. I told her that its looks like an abandoned building and that no one would go near it. She told me that she wasn't scared as long as I went with her. The result is for you to see.
Your comments, critiques and suggestions please. Thanks
Posted by Sujit Sudhi at 12:35 AM 9 comments: 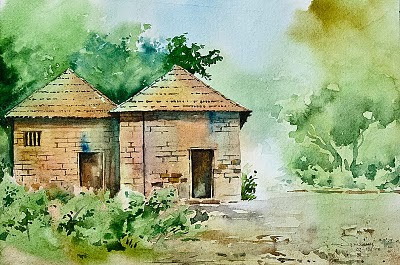 Twin Houses : Watercolour : 15 X 11 inches
Click on the image for a larger view
This is a watercolour based on the sketch in the previous post. The foliage behind the houses bothers me. At the point where I had finished that part I had half a mind to give up.
Well, I must admit that I am glad I didn't !
Guess, I got carried away and overworked a bit with the detailing on the houses. Like they say, its easy to start a painting but very difficult to stop it.
Your comments, critiques and suggestions please. Thanks
Posted by Sujit Sudhi at 11:27 PM 6 comments: 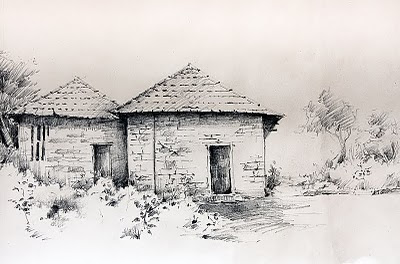 Twin Houses : Pencil : 12 X 8 inches
Click on the image for a larger view
I decided to get back to my painting ways and started with making a sketch of this scene. The plan is to paint a watercolour based on this sketch but I am having second thoughts on the composition. Would a vertical composition work better with such a subject ? Yes, perhaps. How about some foliage behind the houses to make the compostion more tighter and 'busy'.
Your thoughts please. Thanks
Posted by Sujit Sudhi at 3:32 AM 3 comments: 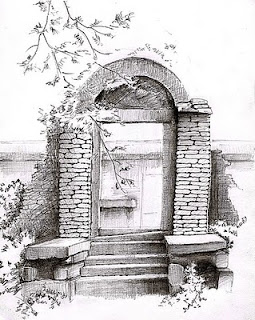 Old Timer : Pencil : 15 X 11 inches
Click on the image for a larger view
Haven't painted or sketched at all for a very long time now. Dug this one out of the archives the other day. This structure is the entrance to a temple in South India. It must be about a hundred years old and sadly gave away a few years ago.
Posted by Sujit Sudhi at 8:24 PM 5 comments:

Sujit Sudhi
I own a few brushes, some paints and an easel. One some days I try to put them into use. And when I am done, I pretend to have created a masterpiece !